False morels (Gyromitra spp.) are iconic primarily for what they are not – true morels (Morchella spp.), the choice edible mushrooms that are widely foraged and enjoyed in the United States. I believe these mushrooms deserve an identity separate from what they are not, so I'm adopting the name "lorchel", a German word that is great in English as well. Some lorchels contain a mycotoxin called gyromitrin, which is converted in the stomach into monomethylhydrazine, a component of rocket fuel that is as bad for you as it sounds like it would be. You'd think this would be a deterrent to the consumption of lorchels. However, in Scandinavia, the deadly poisonous Gyromitra esculenta is widely consumed as a delicacy after first being prepared with a laborious parboiling procedure to rid it of the majority of its gyromitrin. Across the United States, especially in the Midwest, there is also a culture of consuming certain lorchel species. Some of these are anecdotally considered nontoxic, or at least less toxic than Gyromitra esculenta. However, we have a limited understanding of which lorchel species actually contain gyromitrin. My first goal is to figure out the phylogenetic distribution of gyromitrin in the lorchel family, Discinaceae. 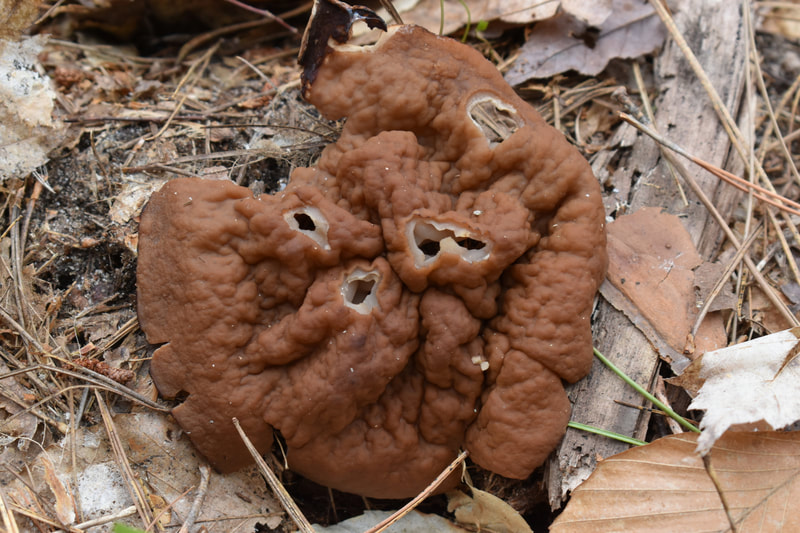 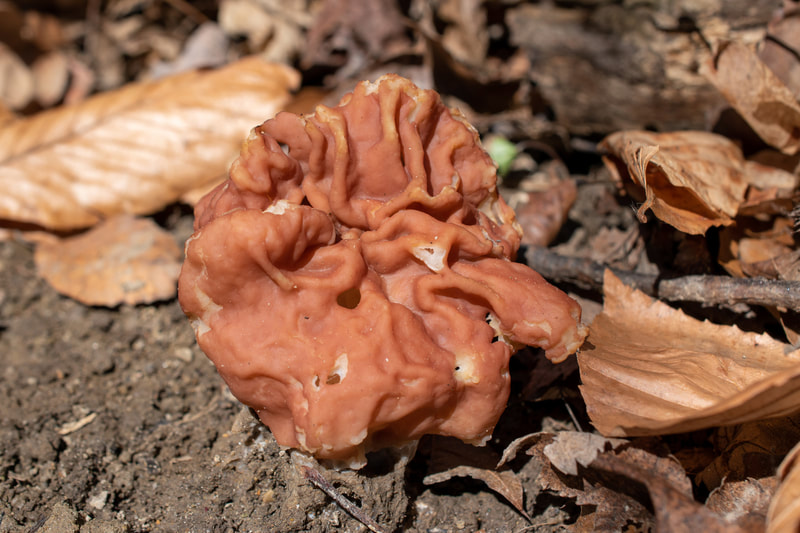 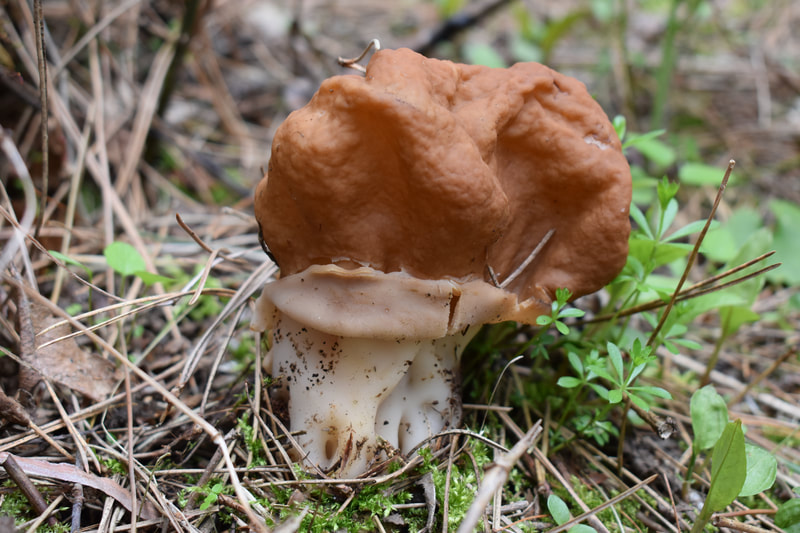 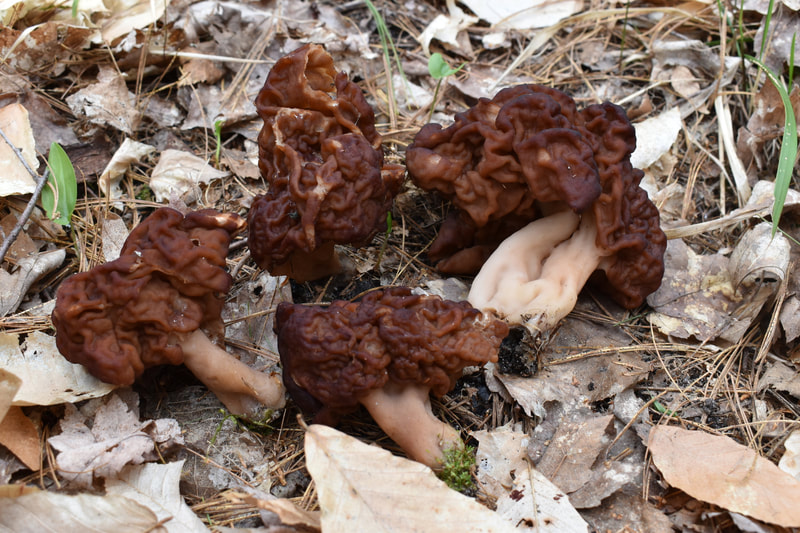 There are about 85 species in the lorchel family, but only four are common in Michigan. From left to right: Discina ancilis, Gyromitra brunnea, Gyromitra korfii, and Gyromitra venenata. Only G. venenata is known to contain gyromitrin. G. brunnea and G. korfii are anecdotally regarded as safe to eat without special preparation, but we do not know if they produce gyromitrin.
Gyromitrin itself is an interesting molecule that belongs to a rare class of compounds containing a nitrogen-nitrogen bond. Only about 0.1% of the total diveristy of secondary metabolites produced by living organisms belong to this group. We have no idea what genes are responsible for gyromitrin production, so my next goal is to discover its genetic underpinnings. Once we identify the genes responsible for gyromitrin production, we can then explore its evolutionary history. Which evolutionary processes gave rise to gyromitrin production in lorchel mushrooms? Fungi produce an enormous diversity of powerful secondary metabolites (think penicillin, lovastatin, and cyclosporin, among many others), but the genetics and evolution of the vast majority are unknown. Therefore, this research could expand our understanding of nitrogen-nitrogen compound biosynthesis specifically and fungal chemodiversity in general, aiding in the discovery of novel chemicals.
We are looking for all the help we can get to crowdsource Discinaceae fungi, which includes saucer-shaped mushrooms in the genus Discina as well as truffle-like, underground mushrooms in the genus Hydnotrya, in addition to Gyromitra species. Please read these instructions on iNaturalist if you are interested in contributing. I hope this research will help mushroom foragers by identifying which lorchels contain gyromitrin and which ones are completely lacking it (and thus safe to eat, at least from the perspective of gyromitrin). If some species are found to contain small quantities of gyromitrin, we will not be able to say whether that mushroom can be safely eaten given that the toxicology of gyromitrin in the human body is not the focus of this work.

Crust fungi (or corticioid fungi) do not evoke much excitement or command great respect, even in the mycological community. However, they are extremely diverse and ecologically important. This is in part due to the fact that crust fungi are a form group. They are defined not by shared ancestry but by having the same crusty two-dimensional form. In other words, wherever you look across the basidiomycetes, you find crusts. Crust fungi make up for their lack of macroscopic charisma with extraordinary microscopic diveristy, representing the entire spectrum of spores, hyphae, and sterile cells of the Agaricomycotina subphylum. While many crusts break down dead wood, some form mutualistic associations with trees. Indeed, in many forests, crust fungi are the dominant members of the ectomycorrhizal community. The bottom of sticks and decaying logs is a great location to find crusts, but you can also find them on leaves, under conifer duff, on bark, and even on the underside of rocks! I endeavor to describe new species​ of crust fungi and document North American species at my other website, crustfungi.com. In the future, I'd like to make this website dynamic so that crust enthusiasts across North America can upload profiles for their favorite species. 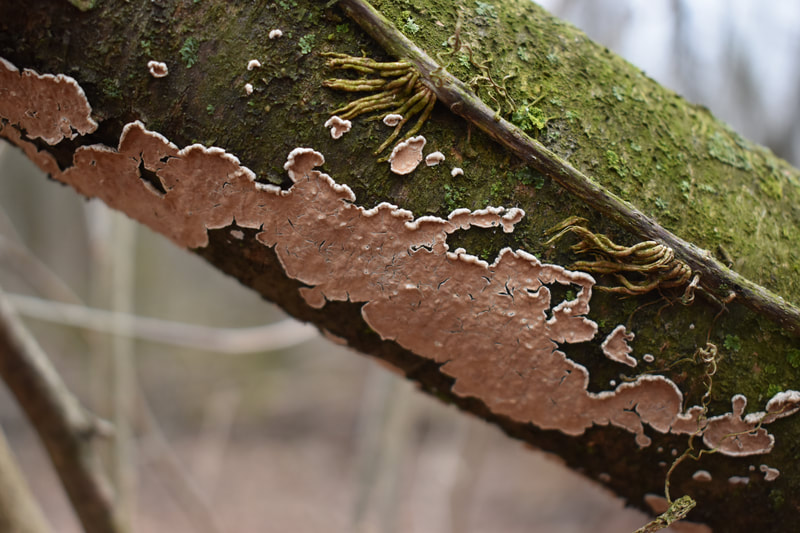 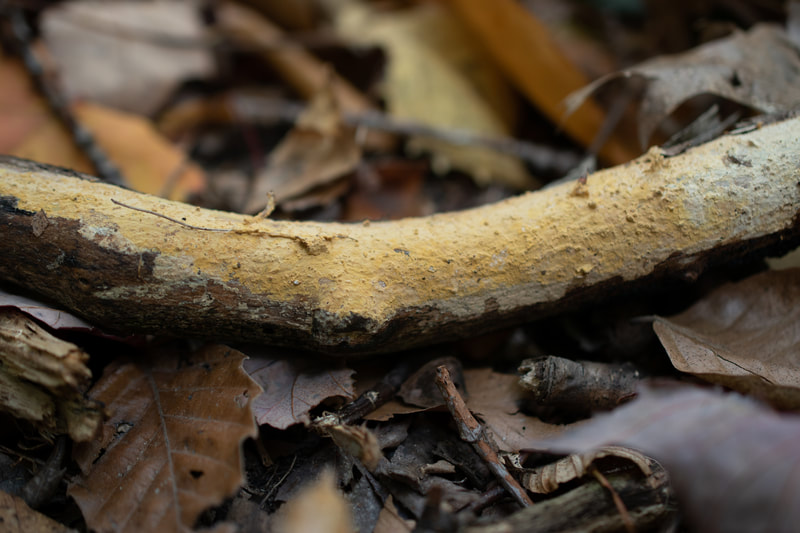 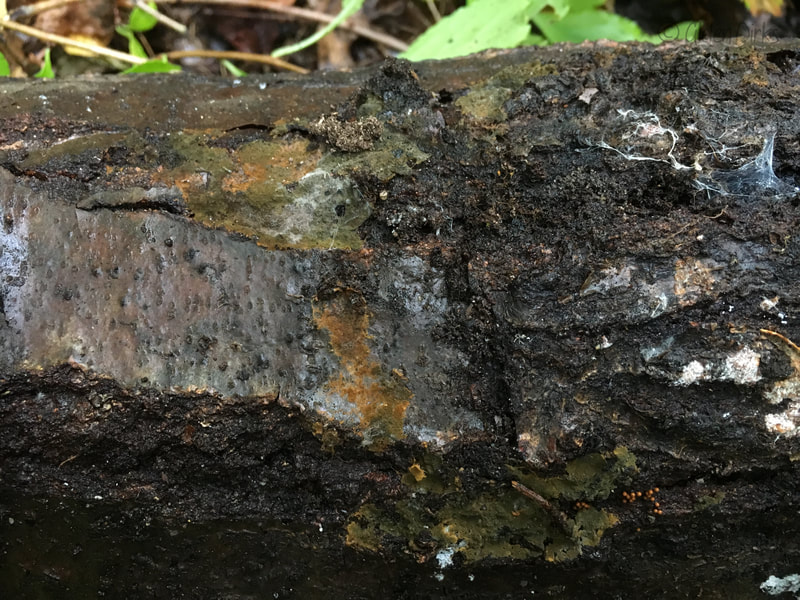 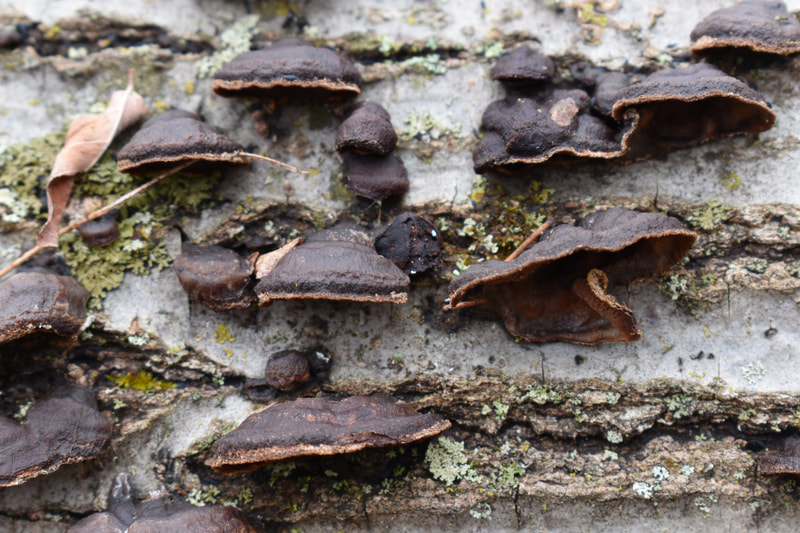 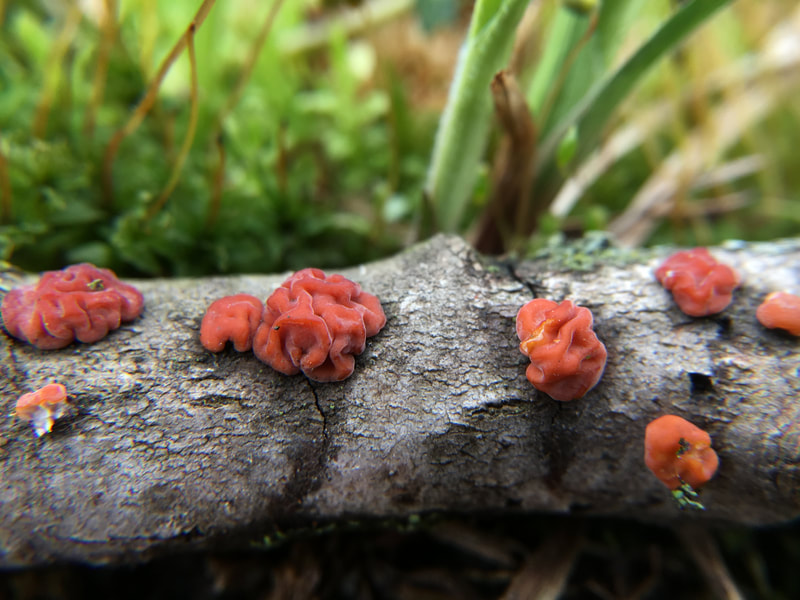